Stem cells drive the renewal of tissues and organs balancing their wear and tear. Intestine is no exception and its inner surface is one of the tissues that is undergoes through the highest rate of renewal. In fish species the mechanisms regulating this vital process are not known even if this knowledge would help the development of innovative and sustainable feeds. The latest results of our researchers at the University of Milan identified for the first time the intestinal stem cell niche at work in the Rainbow trout intestine. This result provides the tools to characterize the staminal component of the cell lines that are being cultured on the 3D scaffolds along the path that is leading to the development of the Fish-AI prototype.

Fish represent the largest group of vertebrates, including almost 21,000 species, more than all other vertebrates combined; they are characterized by a wide variety of anatomical and physiological differences.  Along  the craniocaudal axis of the intestine, we first meet the pyloric caeca, over 50 hollow tubes that branch off the first segment of the mid-intestine, to increase its absorptive surface. These are followed by the rest of the thin and nearly transparent first segment of the mid-intestine that continues in the second segment of the intestine, easily recognizable for its larger diameter and darker pigmentation due to  the  presence  of  circularly  arranged  blood  vessels.

Fish  intestinal  mucosa  lacks  two  typical structures found in mammals: the crypts of Lieberkühn, and the villi. Throughout the length of the whole intestine, the mucosa raises in large folds, and, in the second segment, some of them are up to three times higher with smaller secondary folds branching out along their length. For their peculiar structure, these are known as complex folds. 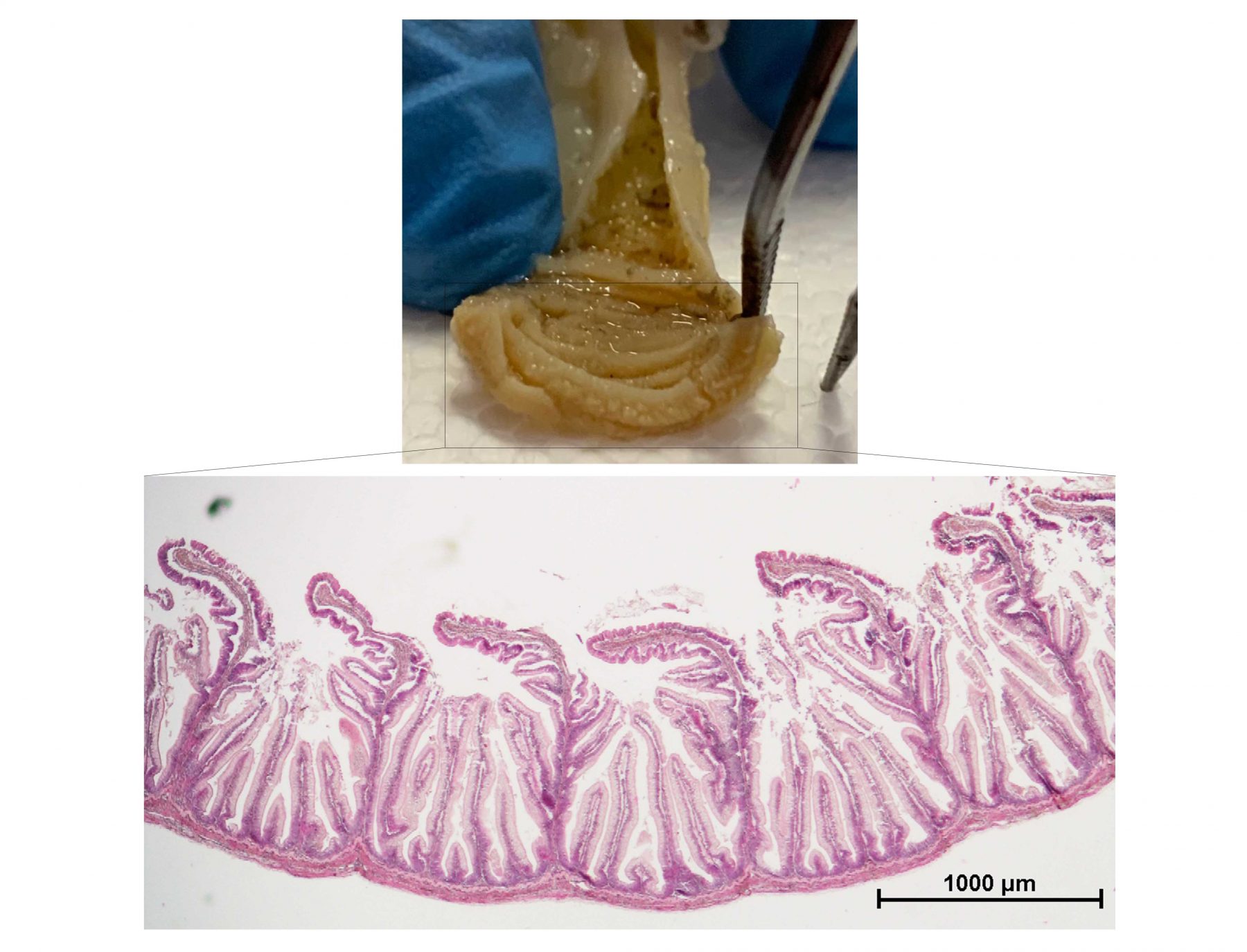 Characteristic structure of the Rainbow trout second segment of the distal intestine with the normal plicae alternated with the much taller complex folds.

Cell proliferation (brownish colour) is less intense and widespread in the first (A) compared to the second (B) section of the distal intestine. Fully differentiated enterocytes expressing alkaline phosphatase (blue stain) activity were observed at the villi apex but, conversely, its expression was stronger and more widespread in the second (B) compared to the first (A) section of the distal intestine.

In this work the UNIMI team identified the main components of the intestinal stem cell network and found that it is remarkably different from that at work in mouse and other mammals. Possibly the most evident example is LGR5, the classical marker of the mouse canonical intestinal stem cell, that in Rainbow trout is not even present in the epithelium but is in the underlying connective tissue. Furthermore, the HOPX gene that in the mouse characterize a tiny population of stem cells that is activated in time of stress, in the trout is expressed by the large population of partially differentiated cells. 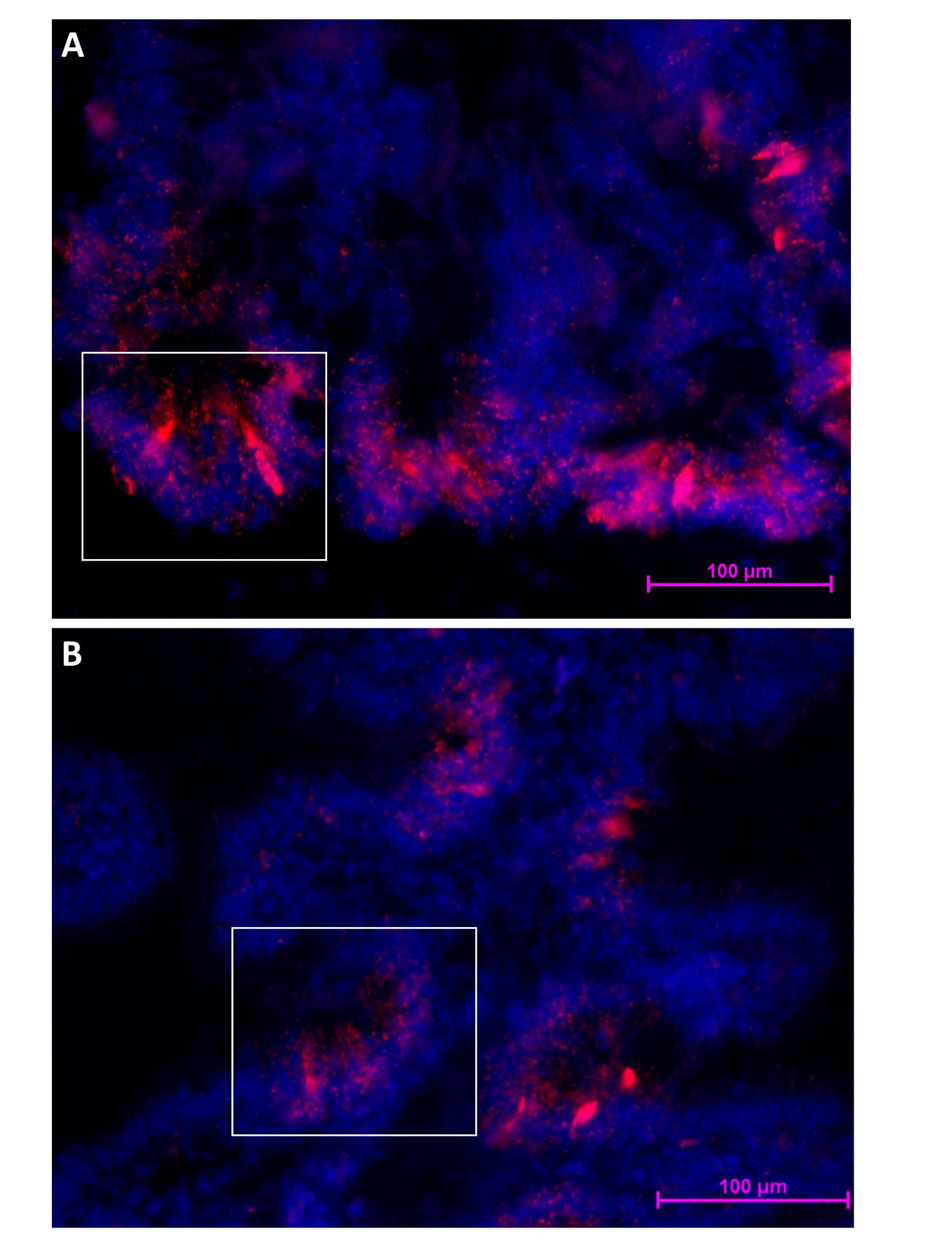 Rainbow trout intestinal stem cells with the typical columnar enterocytes showing an intense sox9 expression at the folds base in second segment of the mid intestine (A) and at the base of the folds protruding from the complex folds (B). 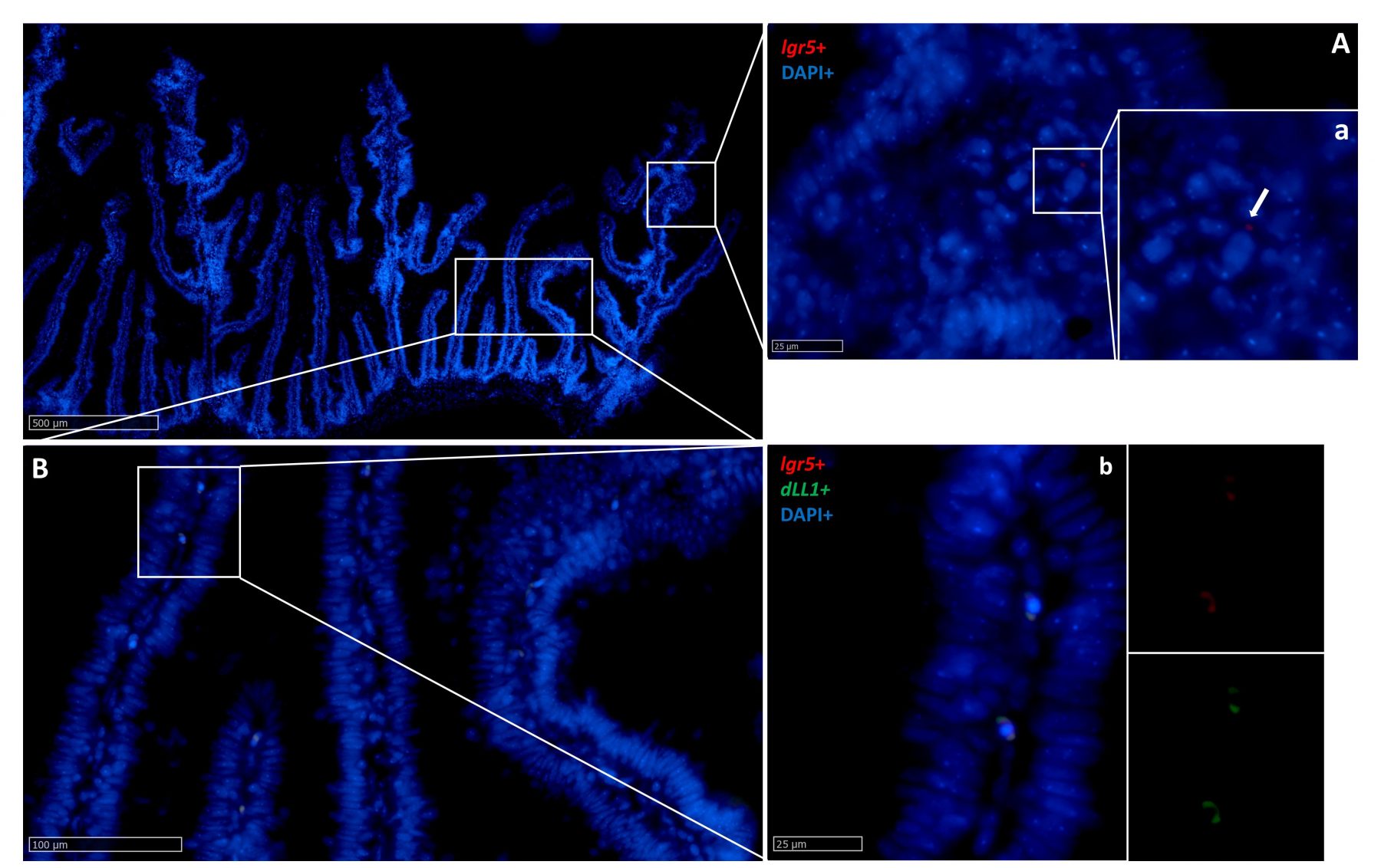 In situ hybridization of lgr5 and dll1 mRNA in the second segment of the rainbow trout mid-intestine. Lgr5 (red dots) expression was low at the complex folds’ apex (A-a: higher magnification, arrow), and more intense at the base of the complex folds and in the rest of the second segment of the mid intestine (B-b: higher magnification). The two genes were expressed in a few cells found along the villus connective axis (b).

Finally, not only the two intersecting regions of the fish intestine mucosa have a distinct enzyme expression pattern, but their proliferation rate is sustained by a different extension of their respective stem cell compartments. 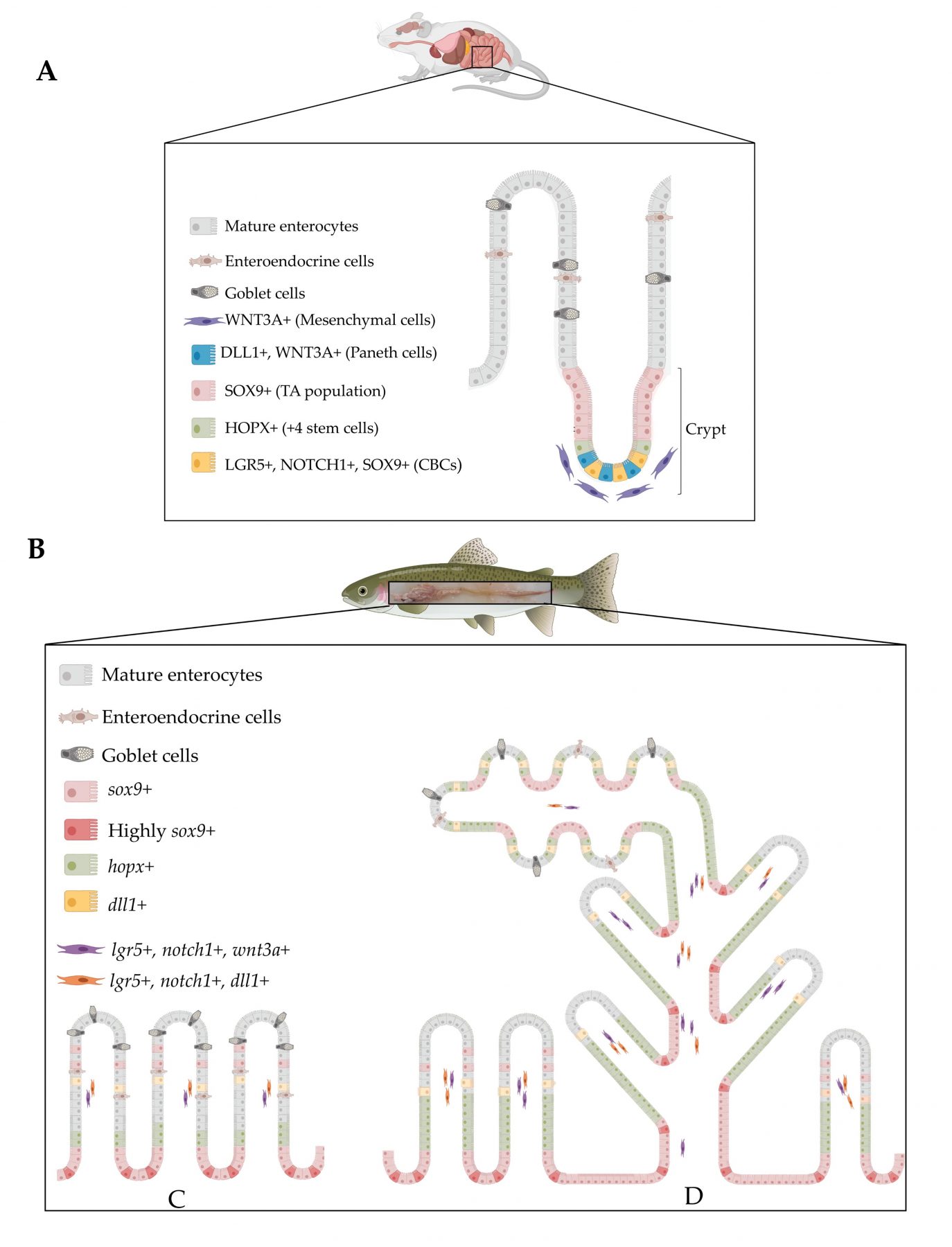 Schematic illustration of the architecture and the organization of the intestinal stem cells niche in mouse small intestine (A) and in rainbow trout (B) in the first (C) and second (D) segment of the mid intestine. In mouse small intestine the niche is restricted to the crypts, where the +4-stem cell, the actively cycling stem cells (CBCs) and the Paneth cells are found. Other regulatory cells (wnt+) are found in the pericryptal connective tissue. Stem cell division originate a pool of highly proliferating cells known as transient amplifying (TA) cells that expands rapidly to produce terminally differentiated cells of both the absorption or secretory type.
In rainbow trout, sox9 is expressed at the base of the fold and the signal is downregulated along the fold length where hopx expression increased and then faded in the upper portion of the folds. Lgr5 is exclusively expressed in scattered cells located in the lamina propria, where it co-localizes with notch1 and wnt3a. Dll1 also co-localizes with lgr5 in the lamina propria and it is expressed in the epithelium near lgr5+ stromal cells. The distribution of these markers along the rainbow trout intestine is not homogenous, but rather the highest expression is in the basal part of the complex folds of the second segment of the mid intestine compared to other districts. (Illustrations created with BioRender.com).